This post will cover how to configure Palo Alto site-to-site VPN with Cisco ASA. However, the post will not cover any of the ASA configuration parts, but please check out Cisco documentation on this link if required. Configuring a site to site VPN tunnel on Palo Alto firewalls is not difficult, but it could be a little bit challenging for the people who are not familiar with Palo Alto UI. I think the main challenge would be where to find some of the settings that could be nested into others.

By default Palo Alto firewalls use route-based VPN, but we can change this to be policy-based VPN if required with just a couple of minor changes, you will go through them in this lab. In our lab we are going to configure the Palo Alto site-to-site VPN with Cisco ASA using IKEv1. Let's get started!

In this step we are going to create our Phase 1 IKE profile to define the DH group, authentication and encryption algorithms, and the Phase 1 lifetime. In the next step we will associate this profile to the IKE Gateway that will tie all the Phase 1 settings together. 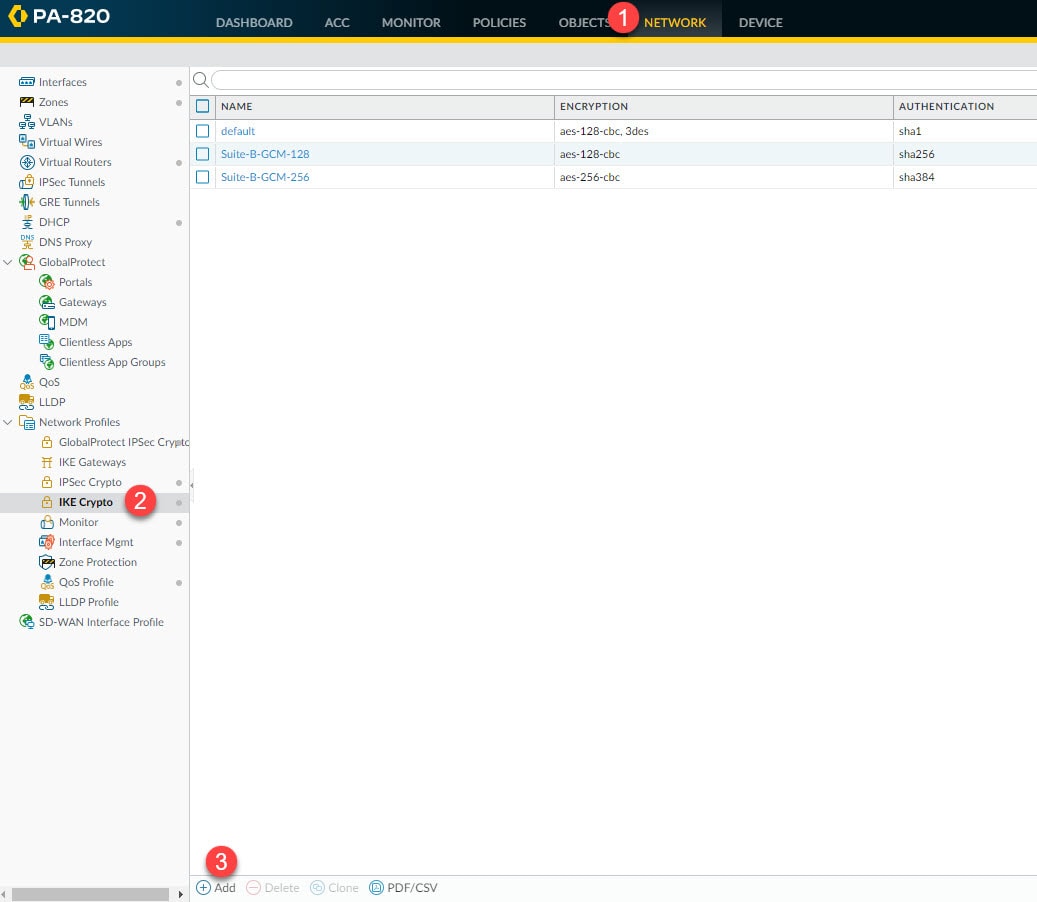 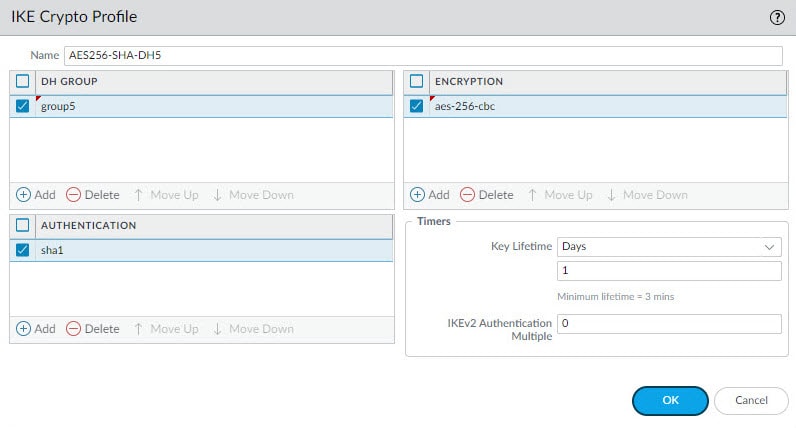 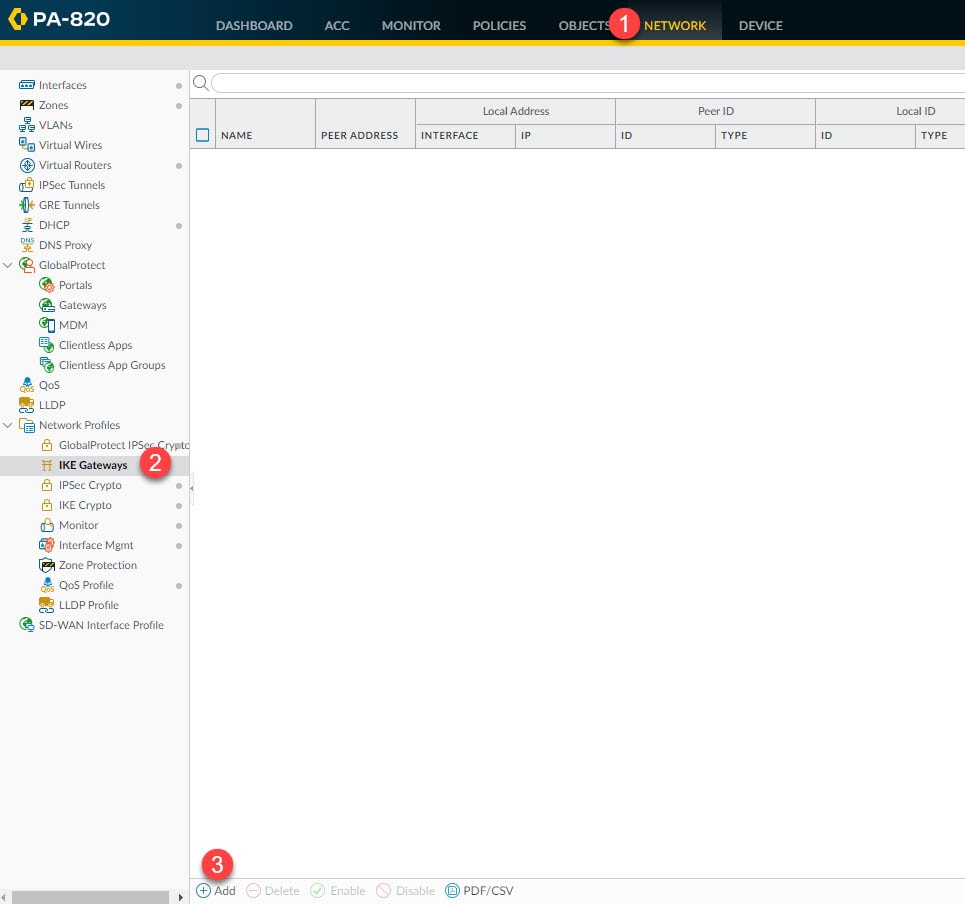 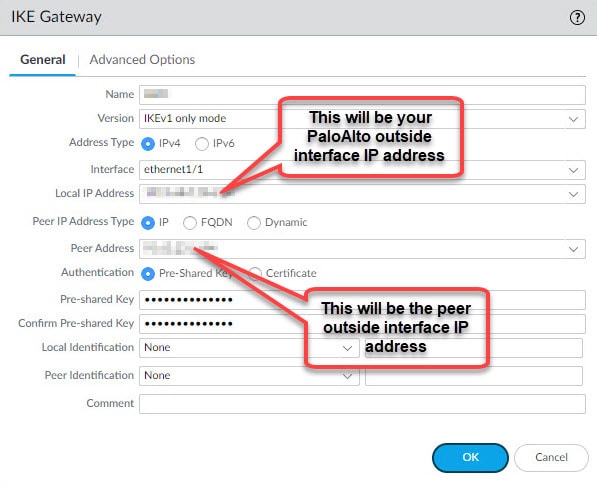 In the Advanced Options tab select the IKE Crypto profile we created in the previous step, and if DPDs are enabled on the ASA leave that box checked. 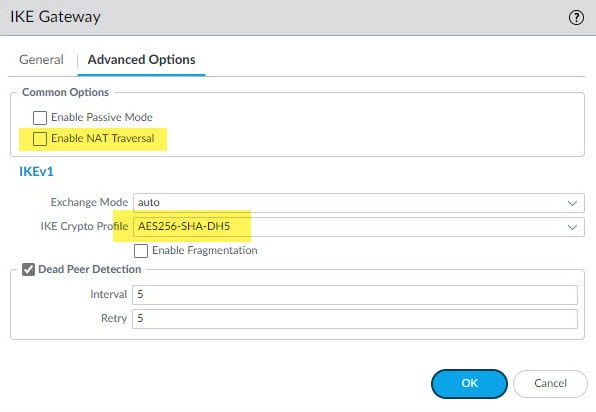 You can enable NAT-T from the Advanced Options tab if the remote peer is behind a NAT device. The Enable Passive Mode can be used if you want the Palo Alto firewall to be only a responder for IKE negotiation.

In this step we will define the Phase 2 settings such as the IPSec protocol, encryption and authentication algorithms and PSF if used. 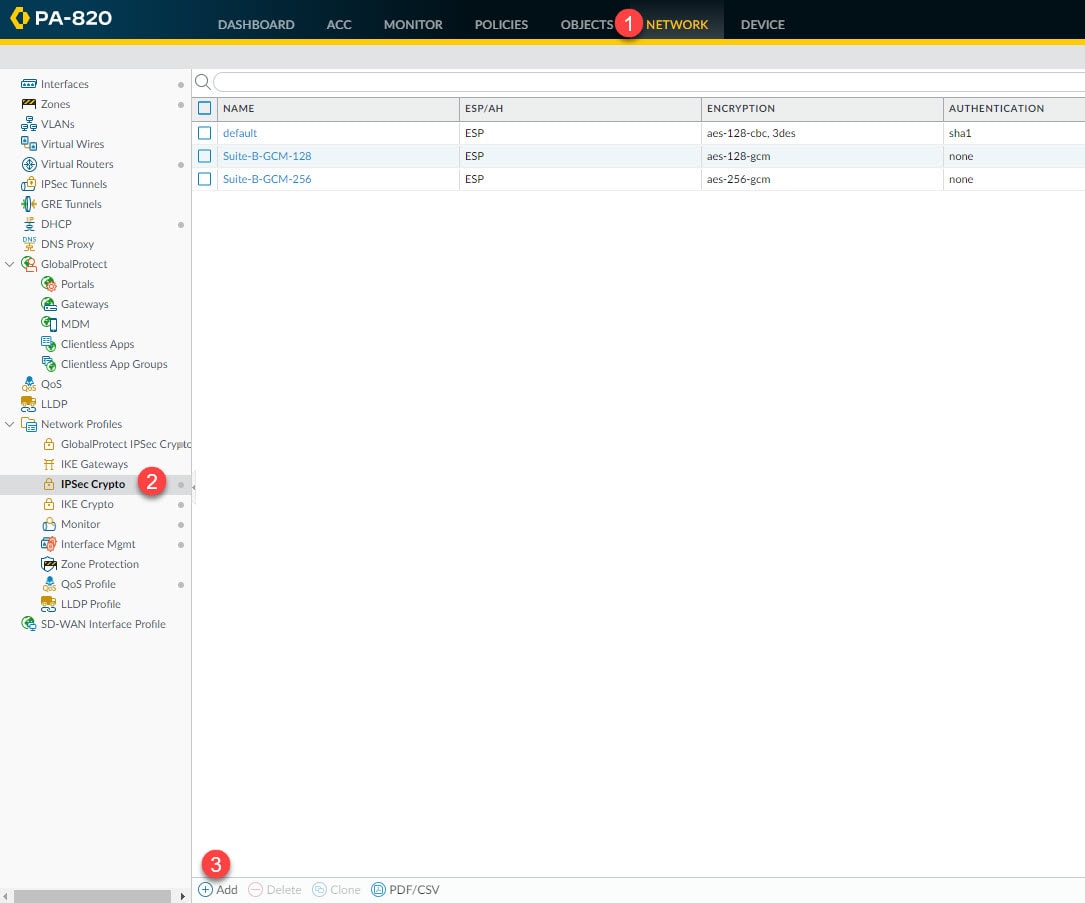 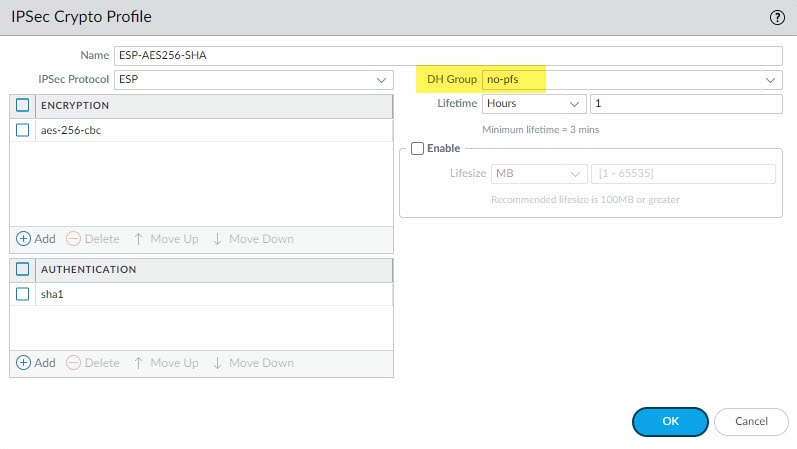 If you are not using PFS you can set the DH Group to no-pfs from the dropdown menu highlighted above.

In our example here we will only select the security zone called trust, and then we will associate the tunnel interface tunnel.1 to the default virtual router from the virtual router section in the next step. 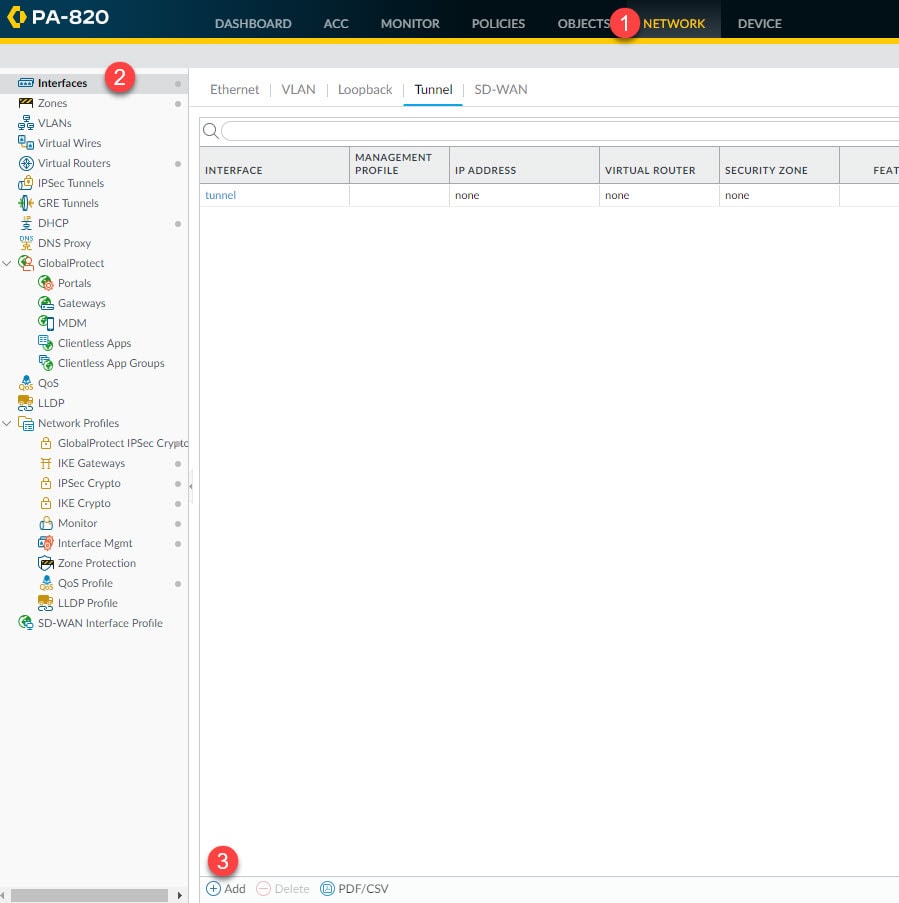 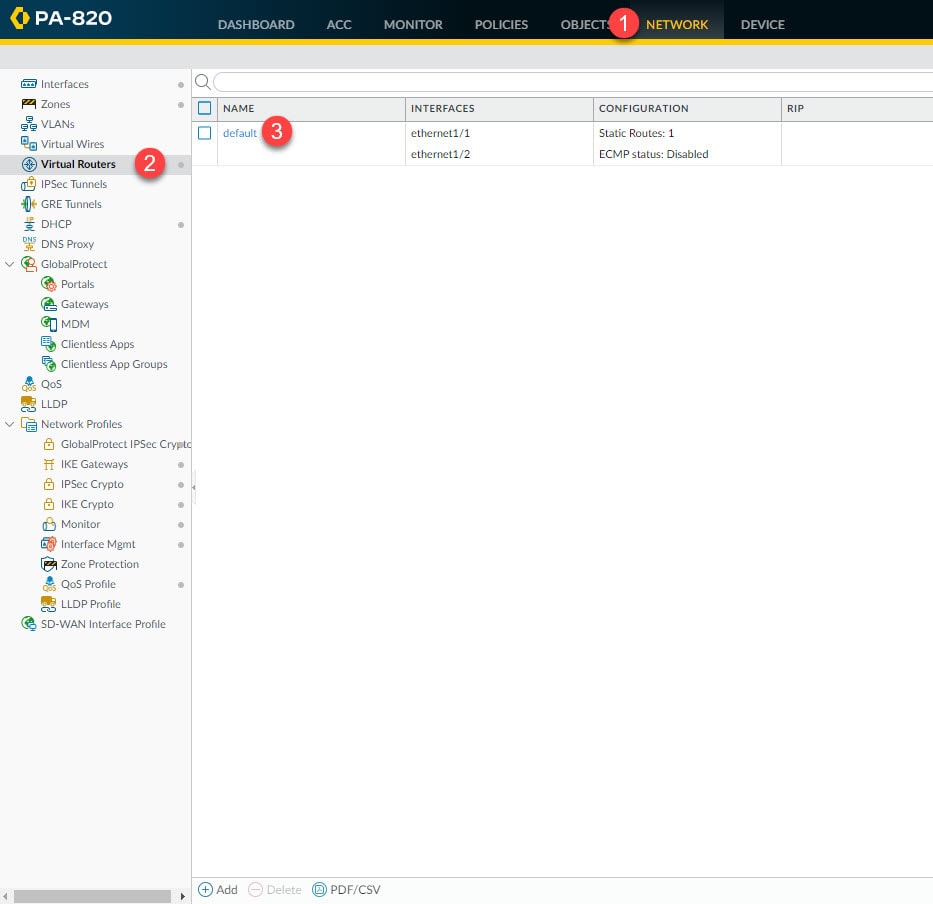 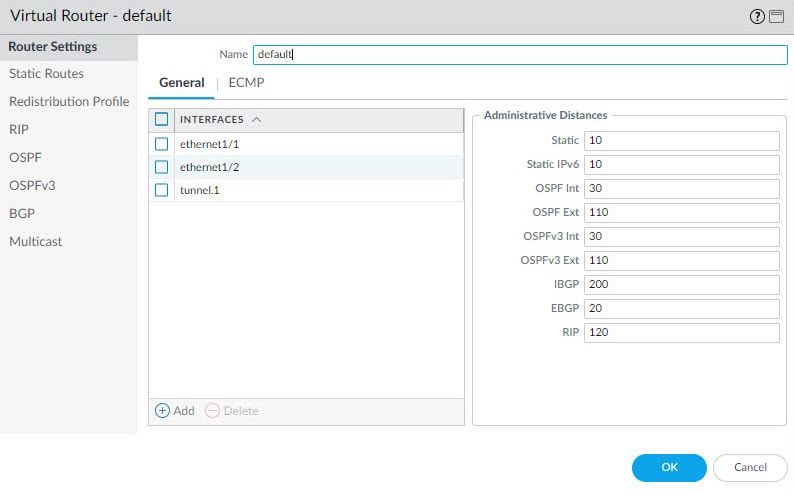 In our example we defined three static routes for the three remote encryption domains behind the ASA. 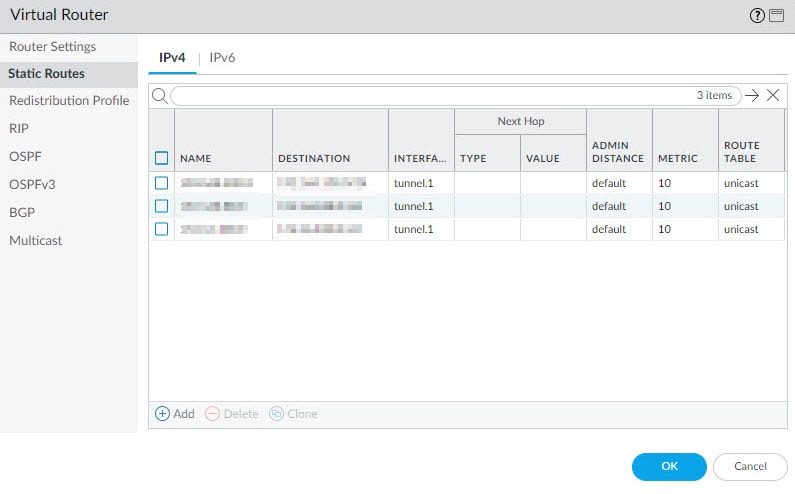 From the IPSec Tunnels section we will tie all the Phase 1 and 2 bits and pieces together. We will also define the local and remote encryption domains (proxy IDs) to change the default behaviour from route-based to policy-based VPN tunnel. 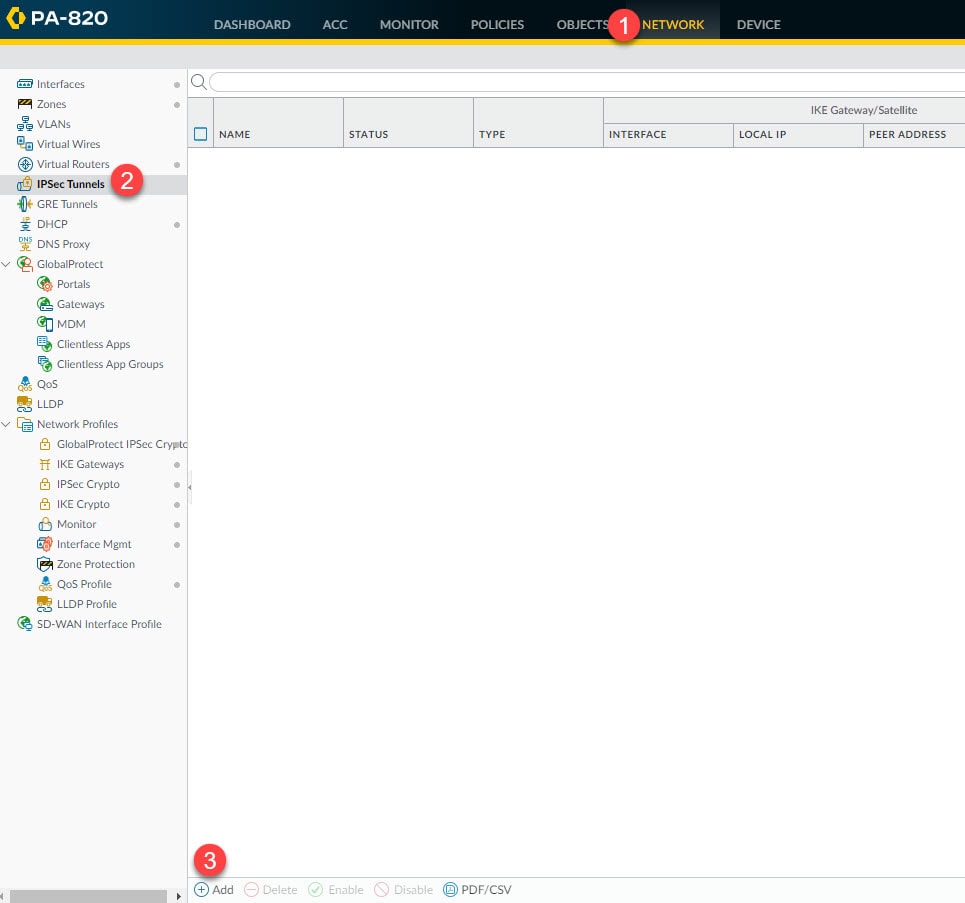 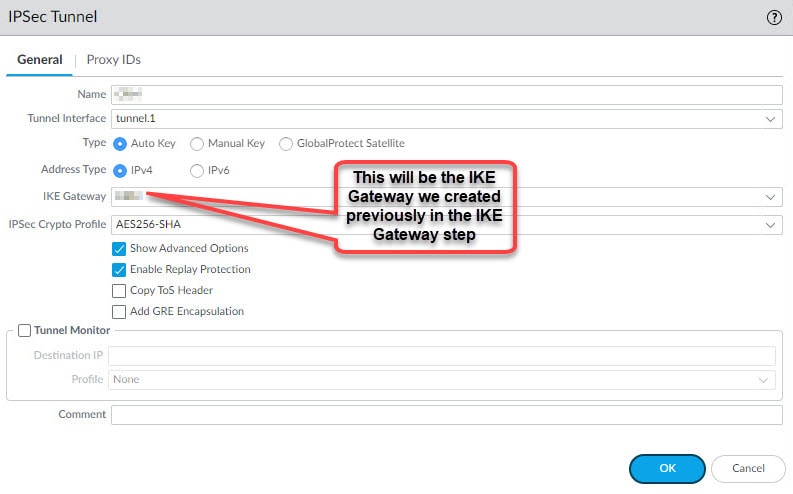 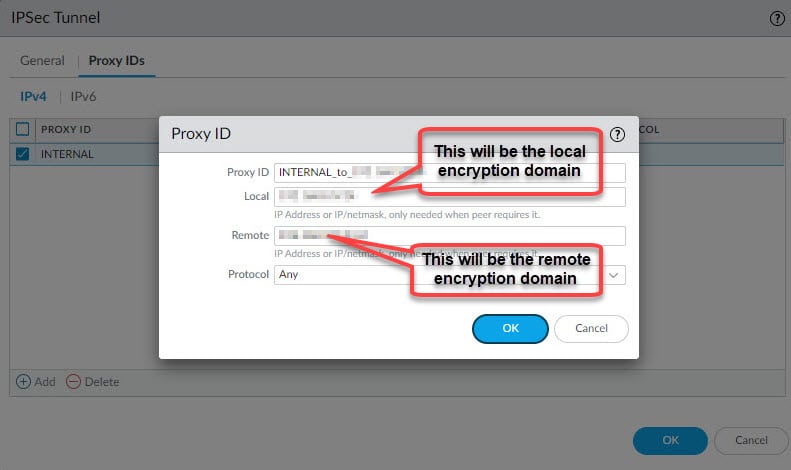 The security policies configuration for the VPN tunnel depends on our existing security policies. Palo Alto firewalls have a couple of default rules, one is the intrazone-default and another is the interzone-default. The intrazone-default rule is used for the traffic traversing within the same zone, and it is set to Allow action by default. The interzone-default rule instead is used for the traffic traversing between the zones, for example, between trust and untrust, and this rule is set to Deny action by default.

This means that if we are leveraging the default rule intrazone-default which by default will allow the traffic traversing within the same zone, then we don't have to add any security policy to make our VPN tunnel functional.

In the example below we are leveraging the intrazone-default rule, and this rule will allow both the IKE negotiation traffic (untrust to untrust) and the encryption domains traffic (trust to trust).

For the IKE negotiation traffic we created another rule called Allow_VPN_Peers and defined the remote ASA public IP address as the destination address. We also defined the ike and ipsec-esp as the applications from the Application tab. The source IP address can be any, or if we want to be more specific we could define the Palo Alto outside interface IP address.

As you could see, we did not cover anything regarding NAT exemption (Identity NAT). That's because our NAT policy is configured to only match the traffic from trust to untrust zones, so it won't affect the IKE negotiation or the encryption domains traffic since again that traffic will be flowing within its related security zone.

This wraps up our post about Palo Alto site-to-site VPN with Cisco ASA configuration.