When we promote the secondary PAN to be the primary, a whole synch between the two nodes will happen. Also, the application services on both nodes are going to be restarted.

The whole operation might take up to 15 minutes based on what I have seen on different deployments so far. During the promotion process any logged user to the management console will be kicked off. That is due to the application services restarting.

However, the dot1x and MAB authenticated users or devices should not be affected by this operation. That is because those authenticated sessions have been already served by ISE nodes. But if any of those sessions happened to time out and needs to re-authenticate while the applications did not complete the restart, the authentication might fail.

A couple of things to remember with ISE failover is that in an ISE two nodes deployment there is no possibility to run an auto failover. ISE auto failover requires at a minimum three nodes. Two will be the two PANs, and one extra node. This extra node can be a PSN as an example. The extra node will act as a health checker to the primary PAN. When the primary PAN goes down, the health checker node will send a request to the secondary PAN to promote to the primary.

The other thing to remember is that with ISE failover in general there is no preemption. Which means if you promote manually the secondary PAN to become the primary, or if you have a deployment with three or more nodes and you have the auto failover enabled, when the old primary comes back online, ISE will not re-promote it to become the primary again. The old primary PAN will keep being the new secondary PAN in the deployment.

A good CLI command you can use to keep an eye on the synch progress is show logging system ade/ADE.log tail. This command shows a whole lot of things, but I consider it pretty useful and I use it a lot. Our topology is pretty simple, we have a two nodes deployment.

Connect to the secondary PAN through HTTPS 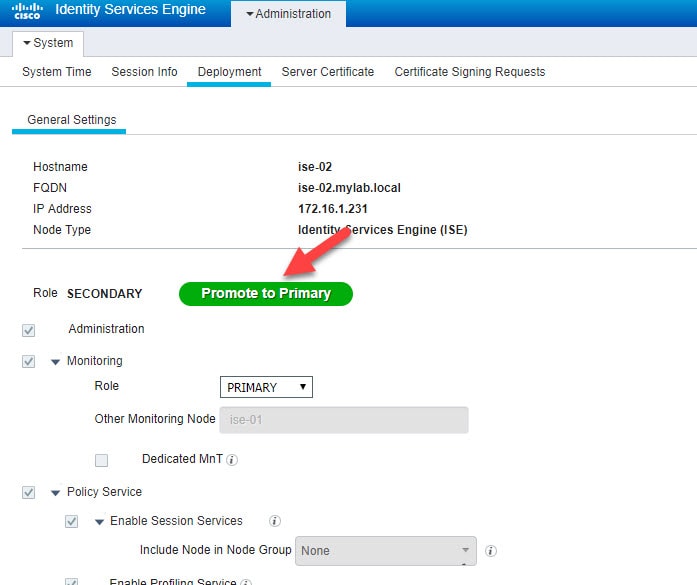 This wraps this post about how to promote ISE secondary PAN to be the primary.

I work as a security technical architect with exposure to different environments and different technologies. I love exploring the new technologies and going the extra mile to understand how they work behind the scenes. My main BAU focus area are Cisco ISE, Firepower and AnyConnect.

How to use Active Directory OUs in Cisco ISE Authorization Rules?

How to Shutdown Cisco FMC?