A couple of reasons comes to my mind about why we would need to do that would be if we are replacing a device. Say we have a partially faulty device and we want to replace it with a new one. Or maybe we are deploying multiple FTD appliances where most of them have a bunch of common configs. Or yet, maybe we are upgrading from a platform to another. For instance, a Firepower 2110 to a 2130.

So far, those are the reasons that came to my mind that would validate using those features. If you think about any other reasons please share them in the comments below. After testing those commands, I found them very handy, and very quick to replicate the configuration. Now, I could test this only on virtual FTD appliances since my lab runs on VMware. However, this feature would also work on physical appliances in the same way as the virtual.

From what I could see and verify, the FTD Get Device Configuration and Push Device Configuration features literally copy and apply the whole configuration from a device to another. That includes policies, routing, IP addressing, sub-interfaces, Security Intelligence, pre-filter, DHCP server, DHCP Relay, etc etc. That will also include enabling the check boxes of the device licenses. The exception for this is the management interface IP addressing, which makes sense to me. All the management interface settings remains intact.

As you might be already thinking, what would happen if we replicate the configuration and the data interfaces IP addresses will be the same!. Well, this means that we will have IP conflicts on our network if both FTD appliances are up and running at the same time. That of course will be disruptive. However, the good news is that we can still remediate this situation.

Say, we copied the configuration from device A to device B. Now both devices have same IP addresses (with different MAC addresses) assigned. However, the very important piece of detail is that copying the configuration does not mean we applied yet.

What I mean by this is that the way how the FMC does the replication is divided in phases. Phase one is to stage, in this phase the device B in our example gets its configuration assigned, and ready to be deployed. Therefore, until we apply those changes nothing will happen on device B. The second phase is actually deploying the changes. Once the deploy is completed, both devices will have same active configuration.

Please keep in mind that we don't actually need device A to be up at phase two. So we can just deploy the changes to device B while device A is shutdown. However, device A obviously must be up before we can get its configuration replicated to device B, but that is in phase one as we said.

However, if we are adding device B to our network as a new device, and this device needs to have the most of the configuration replicated but the IP addressing, then here is the fix. Basically, after phase one has been completed and before phase two, we can go to the device B and changing its data interfaces IP addresses, and anything else if required.

This means that when we go for phase two to actually deploy the changes to device B, it will apply both the changes that have been replicated from device A, as well as the changes we changed manually. As a result, we will have device B with all the configuration identical as device A, with the exception fro the data interfaces IP addresses that we changed. Now let's see how this works in action.

In our lab we have two FTD appliances, one is called FTDv-02 and the other is called FTDv-07. We will replicate the configuration from FTDv-02 to FTDv-07. As phase one, we will stage the configuration replication using the FTD Get Device Configuration feature. And as as a remediation action before we head to phase two, which is the actual deployment of the changes, we will shutdown the FTDv-07 data interfaces. But you can also change the IP addresses or any other thing before you hit deploy.

Step 1: Go to Devices > Device Management and click on FTDv-07

Step 2: Verify how the FTDv-07 does not have any configuration as yet since it has just been added to the FMC 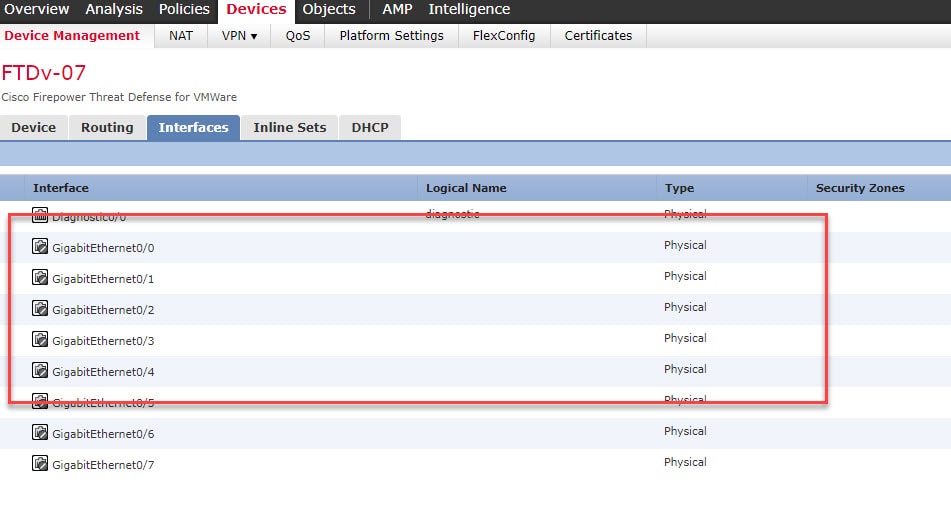 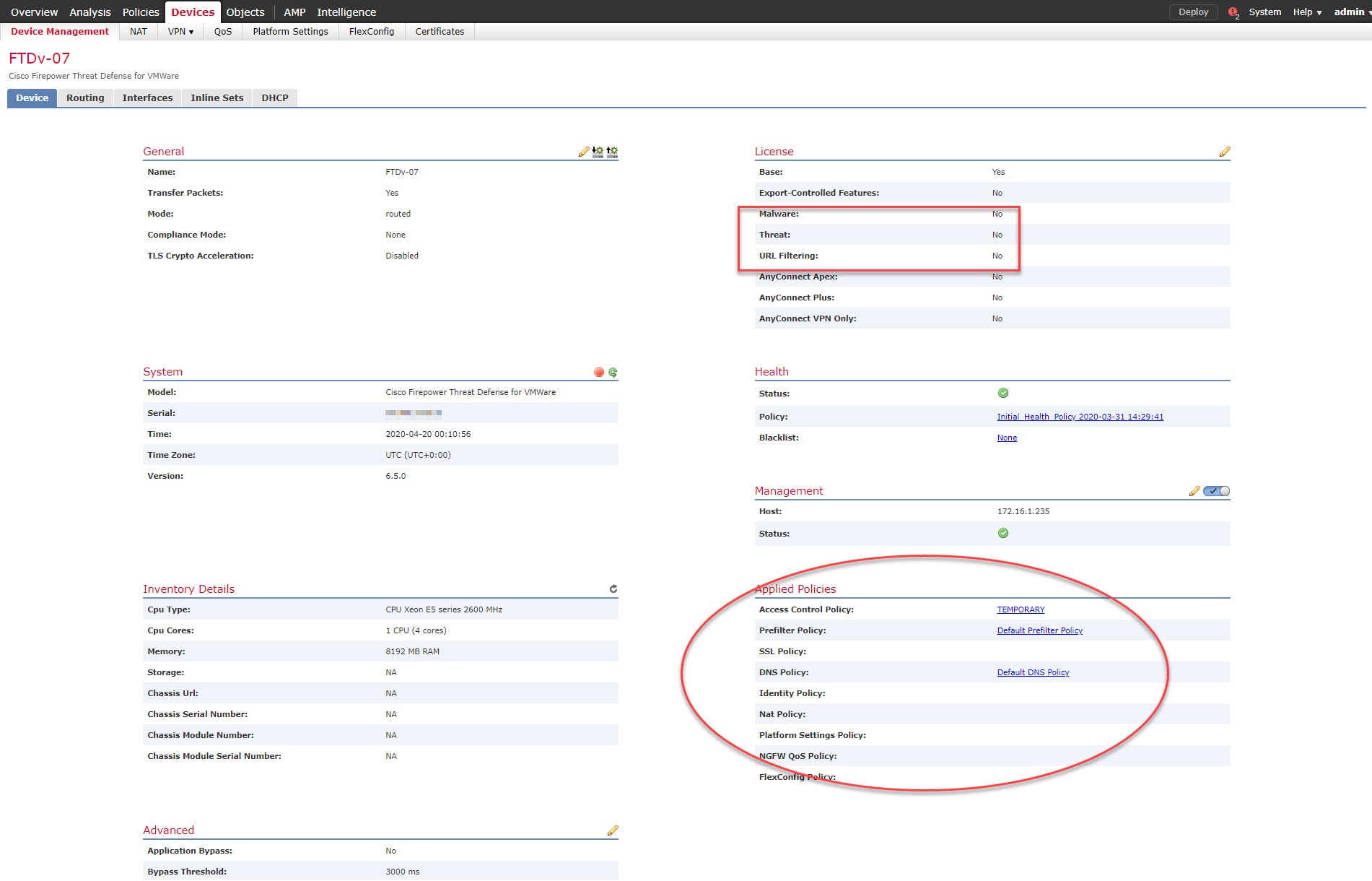 As you can see, the Security Intelligence licenses are not enabled on FTDv-07 as of now. Also, the only applied policies are the temporary one I had to apply since that is a mandatory requirement when we add an FTD to the FMC. The Prefilter Policy and DNS Policy are applied to any added FTD by default.

I find the above message slightly confusing as it states "to replicate from FTDv-07 device?" when we are actually replicating from FTDv-02 to FTDv-07.

Step 5: Go to Tasks tab to check the phase one (preparation) status

Step 6: Go back and check if the FTDv-07 now has any new changes pre-staged 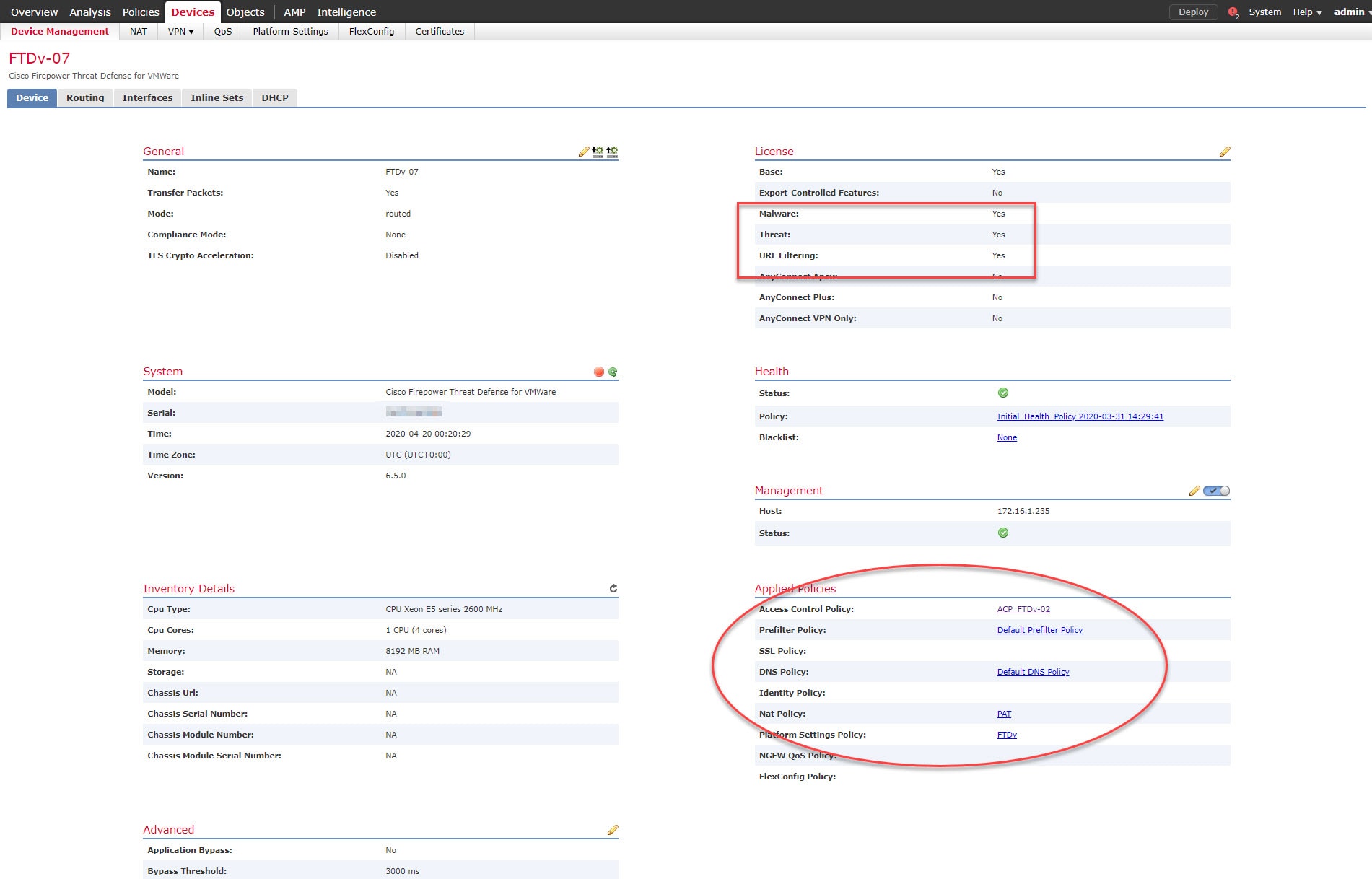 In addition to the data interfaces, IP addresses, route, etcc, notice how the Security Intelligence licenses also are now ticked, and the applied policies have changed.

Let's go to check the devices ready for the deployment

Step 7: Go back to Devices > Device Management > Interfaces and disable both Gi0/0 and Gi0/1 interfaces

As mentioned above, we are going to shutdown the FTDv-02 data interfaces in FMC. However, you can amend whatever changes based on your requirements. 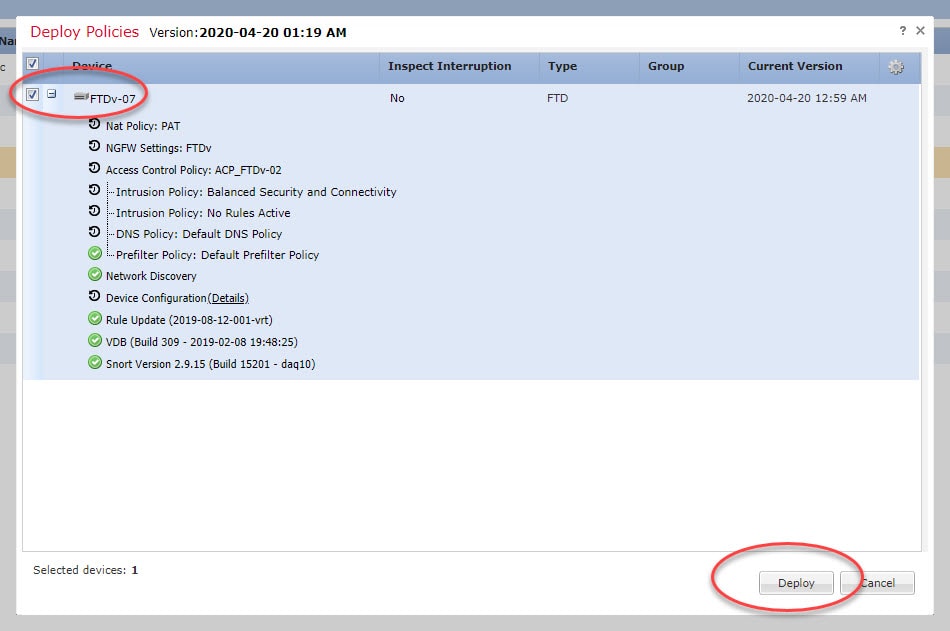 Notice the list of configuration that will be deployed to the FTDv-07 device. Also, clicking on the Details hyperlink in the Device Configuration section will even show more configurations to be applied to FTDv-07.